Day Forty six.  Barmouth to Aberystwyth and beyond

Woke up in the RV after a tough night from the storm still feeling dispirited about the prospects for today.  The forecast said rainy and cold to start, clearing mid-morning and the sun might be out by the finish.  I got ready slowly, without much enthusiasm and put on my winter tights over a pair of bib shorts.  I’d hadn’t packed them originally, not expecting the weather to be so severe throughout the trip.  Whilst the rest of the country had sweltered, we had always been at the epicentre of whatever bad weather remained.  I’d used sun cream twice since Norfolk.  I’d finally asked Jane to send winter gear which she had done.  A package of lovingly assembled stuff and encouraging messages had arrived in Carlisle, just in time for the only heat wave of the trip of course.  That was, of course, gone now.  I put on the GB top that Karen Darke had given me for good measure.  I felt I might need to channel her strength.

We’d arranged to meet Neil by the dolphin statue on the front at 10:00, hoping the rain would have cleared by then.  Miracle of miracles, it had.  Andy and I crossed the railway by letting ourselves through the gates by the camp site, and we rode gently on the sea wall into Barmouth.  The tide was fully in, the boats that had been grounded yesterday were bobbing and the estuary looked stunning.  We met Neil, who was looking lean and keen.  A couple of photos, and we set off.

The railway bridge and the storm clearing

The first part of the ride was a real treat.  I’d cheered up by now anyway, but the railway bridge that we crossed would put a smile on anybody’s face.  It runs dead straight across the estuary towards the hills, keeping low to the water, its wooden slats clacking and rattling under the bike wheels.  We stopped several times to enjoy the view and take snaps, Andy taking video as he rode and posting it real time on Instagram.  I don’t have enough hands or balance for that, but he is another who can change his clothes whilst riding and it doesn’t seem to bother him. 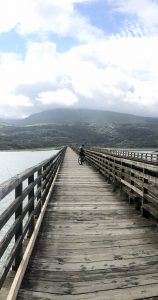 Over the bridge, we picked up a good cycle track for a short while and then came to a the main road that climbed long and easy around the headland opposite Barmouth.  It was very quiet.  Joy.  There were the gorgeous views that I had so missed yesterday, and, contrary to the forecast, the sun was out already and was even pretty warm.  The lanes continued into farmland.  Everywhere, there was evidence of the storm from last night.  Leaves and little branches littered the road when we were in woodland; rocks and gravel were washed into the road to keep us concentrating and there were some little floods on the road from time to time. 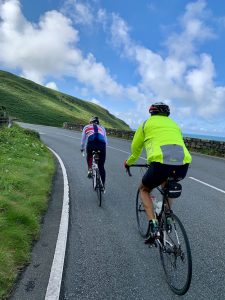 Taking a fork of the main road, we rode easily on lanes and another cycle path until we got to Tywyn.  We were due to stop in Aberdovey, a little way away, but I was gagging for a decent espresso.  We stopped at a little café on the front.  I went in to order.  They didn’t do espresso!  So latté (which surely contained a shot of espresso?) it was.  It tasted of nothing.  We didn’t finish it and we went on our way to Aberdovey very soon. 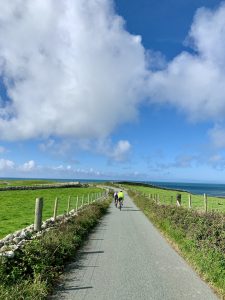 Aberdovey was another lovely town.  We greeted by full on sunshine by now.  The crew had found a spot in a little garden by the front opposite a café.  Decent coffee this time and a slab of delicious flap jack was just the job.  Andy, Neil and I sat in the sun a chatted easily.  Then it was time for a policy decision.  Did I risk it and take my tights off.  The superstitious part of me was sure that the only reason we were warm in the first place was because I’d put them on the first place, so I was tempted to leave them on.  But I was overheating and we had a long way to go.  So off they came.  Maybe it would be their only outing? 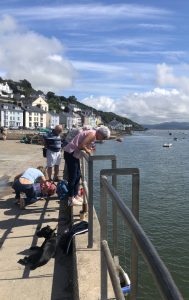 We’d decided to put some extra km on today’s itinerary.  The following day was originally scheduled as nearly 150km from Aberystwyth to St David’s, with a lot of climb too and another miserable forecast of wind and driving headwinds.  We’d decided to go about 30km past Aberystwyth today, get two climbs done and make the following day more manageable.  This was in my head as we rode the 10km up the river Dyfi, feeling tired suddenly and struggling to keep up with the pace.  Round the top of the estuary and over the bridge I perked up though and the miles went quickly by until we reached Borth beach.  Jake had found a good picnic spot and I made up some tuna mayo for a change and ate it very happily.  Today’s big challenge was just ahead though.  Just out of Borth is a steep climb.  I could see from the route profile that it was sharp and mean, I couldn’t tell how sharp.  We’d been able to see the road slicing up the hill as soon as we’d come round the corner of the Dyfi, three kilometres back.  It wasn’t as clear to see from the beach, but I knew it hadn’t gone away.

Lunch done, it was only a very short roll to the bottom of the climb, then ouch.  This felt as steep as anything we’d done up to that point.  Neil shot off like a mountain goat, Andy stayed with me to coach me up.  I concentrated hard on the road in front of me and on how the pedals kept turning – slowly, but consistently.  I checked my effort – I was steady enough.  I was careful with my balance – keep your weight forward.  The wheel lifted gently a few times, but I didn’t feel panicky as I sometimes do.  It all felt controlled enough.

Then we were coming out of the top of the climb, being photographed, the 25% sign in the background for evidence. 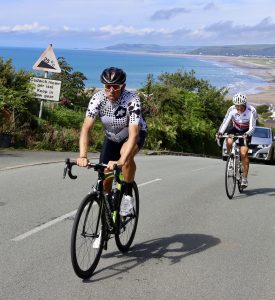 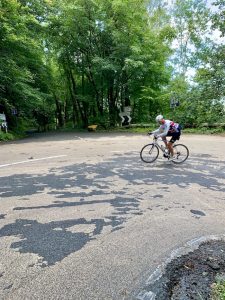 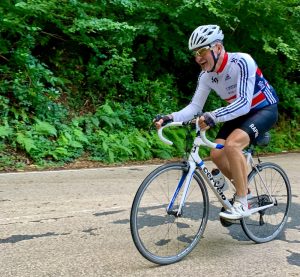 We negotiated the final climb before Aberystwyth (10% – pah!) and went fast into town for what would have been the end to the stage.  We sat on the point, the pier behind us and yet another terrace of beautifully painted, bright coloured houses ahead.  Several people stopped to ask about what we were doing including a couple from Bransgore – the next village to where I live in the New Forest.

Compulsory ice creams came and went, then it was back in the saddle to make the next day tolerable.  These extra miles were easily done.  The first climb was long and steady.  The second was short and sweet.  The weather was gorgeous, crisp and clear; the views were amazing and the sea glittered far below the cliff tops we had climbed.  I felt like I had more in my legs still as we came to Aberarth and got off, ready for a car ride back to Aberystwyth University and dinner.  Hugh had rustled up a huge pasta.  I ate a lot of it, and we reflected on a fantastic day. 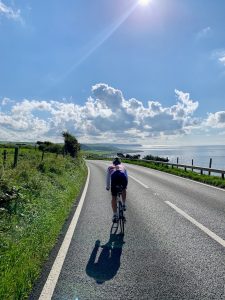