Plan A had been that Simon ride as far as Pwllheli to catch a train and head for home.  However, yesterday’s rain was still clearing, it was so misty you could barely see and we chose to delay the start.  Breakfast dragged on, Simon and Hugh chatted in the RV and the weather gradually cleared.  I also had a consultation with Simon who confirmed what I’d really known for two weeks or so.  I had a small hernia just above my pubic bone.  Nothing to worry about for now was the key thing he confirmed.  It could wait to get sorted after the Tour was done.

The time came for Simon to leave.  He got in one of the cars for his transfer to Pwllheli and was gone with a promise to reappear in Cornwall.  It had been great to have his company and was looking forward already to having him back.  Hugh and I cycled from the camp site to the start in Aberdaron to warm our legs up for the stiff climb from the little village.  The climb was steady enough, but the weather continued to disappoint.  It was spitting with rain and the cloud had come down again so that when we emerged to where there should have been a stunning view, all we had was mist and drizzle. 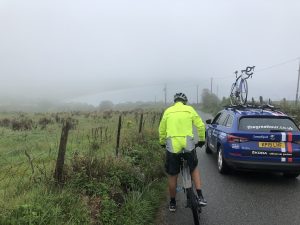 Today we stuck to the designated route.  There were no special circumstances to plan for, weather or otherwise, so we set off into a W shaped wriggle through small hamlets.  We’d just cycled past an equestrienne who Hugh was sure he recognised from somewhere and were still trying to decide where from when we came round a corner to be faced with a sheer wall.  It wasn’t long, but it must have been 25% gradient.  Gritting my teeth, I pushed hard and straight and surprised myself by getting up it without drama, even though the surface was slippery.  Hugh, on his e-bike – had no problem.  They really do make the world flat and will continue to open up cycling to new people as they get more familiar, more of them are built and the price comes down.

A succession of farm lanes followed, and we stayed together easily on the rolling terrain.  Through Abersoch with its marina and gentrified tourists and we were onto a fast road to Pwllheli, plus we had a tailwind.  Here, the difficulty of pairing an e-bike and a road bike was clearer.  Down the wind, I was able to go much faster than Hugh and had to back off and wait repeatedly.

Arriving in Pwllheli, we looked around for a coffee shop.  The first was closed – Covid was the excuse on the sign.  The ice cream stand had nothing to warm us up.  The next had closed the café side of the building and had a long queue for the take-out chippy.  Not what we were after.  It was next to a store that was being refurbished.  Four workmen were having their morning break.  They beckoned us in.  Dylan offered us coffee, we supplied cake from the boot of Jake’s car.  He’d dropped Simon and was back supporting us.

We had a long chat with Dylan about cycling, the Great Tour, how I’d found it, rugby (of course) and then refitting shops.

“What is the shop going to be?” I asked.

“Are the double glazing folk good clients?”  I continued.

“Oh it’s our business,”  said Dylan.  “We have a fitting, building and decorating business, but we supply double glazing too and we’re opening this showroom to promote it.”

“Looks nearly finished,”  I said “is there much left to do?”

“No, not really,” replied Dylan “we’re just waiting for the windows or we’d be done by now!”  It seems every building project is the same!

Still giggling, Hugh and I went outside to restart.  Except that Hugh decided to get back in the cars again.  His hands were still not right, the weather was closing in which would make them worse, and he was holding me up, he said, which would keep me out there longer.  We’d had a late start anyway, so it would already be a late finish.  I decided that I’d solo to the finish in one go and set myself a mental target to be done by 4:00.

I set off for Porthmadog first.  Immediately I was in the saddle it started raining hard.  The only road option was the A497 – narrow for an A road, but busy and now wet.  I cursed and decided to go as hard as I could sustain and get the misery over as soon as I could.  Mouth open, breathing hard, breathing rain, blinking rain, hearing white noise.  And hating it.

After more than 10km, there was finally a road to the right.  The turning was on a dangerous bend, but for once there was no traffic in either direction and I darted into a lane than led to Black Rock Sands.  The little lane was overhung by dense tree cover to start with and, on this gloomy day, it was so dark it was almost hard to see.  But the peace and the complete quiet after the bedlam I’d just experienced was both startling and welcome. 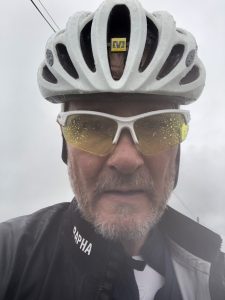 The road became properly single track and climbed out of the woods.  Stone walls and fields to either side, the sky still watery grey, rain drops still all over my glasses.  This was getting all too familiar.  I stopped to wipe my glasses clean and saw Porthmadog below me and to the left.  I dug my phone out of its waterproof pouch to take a picture.  Click.  And was suddenly overwhelmed by the need for a pee.  Middle of nowhere, nobody about, no problem.  Just in time, I heard a noise.  It was the engine of a car coming up the hill and round the bend I’d just come around.  It was followed by another car.  Then another.  I rearranged myself and got off the road onto the verge before they came alongside.  It was funeral cortège.  Thanking fortune that they hadn’t been five seconds later, I hopped from foot to foot as a procession of cars trooped slowly past.  As soon as they were out of sight it was back to business, then back in the saddle and off to Porthmadog. 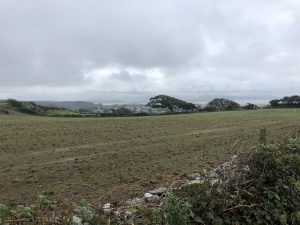 Peace and quiet at least.  Porthmadog down there somewhere

I’d been to Porthmadog before, and knew there should be a great view of the mountains.  Not today, but the bridge next to the railway was still there, and I crossed it and struck out on yet another A road for Harlech and then Barmouth.  Harlech castle is spectacular of course – even in the grey of today – but Harlech also seems to have extra gravity.  At least that’s how I explained the great difficulty I seemed to have hauling myself up a nothing-special kind of hill there.  I was getting tired from my solo effort now.  The refreshment of a sea view was missing too, but at least it was drier now.

I pushed to get the last few km to Barmouth done so I could finish, get clean, warm up and have some food.  After such an uninspiring day it was a surprise to find Barmouth utterly lovely.  I came down through the town and onto the front facing the wide estuary.  The jumble of attractive old buildings made the town seem old, experienced and welcoming.  The estuary and the hills in the background made a grand backdrop and the overall effect was to make me feel safe that I’d got there after a what felt a very difficult day.  What might have been dispiriting became uplifting. 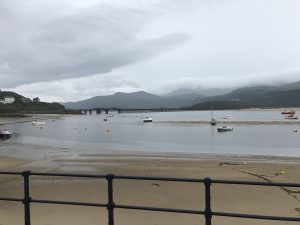 I’d beaten my deadline too.  Fifteen minutes later, I was back in the RV, minus my gloves and looking at my Washing Mothers’ Fingers from being soaked all day.  But I was through another day. 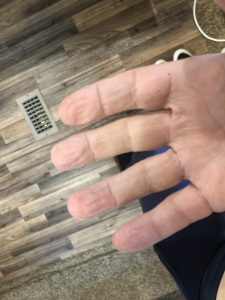 Back in the RV

The evening welcomed back Andy Hawes, who had ridden in Kent with us.  Plus, an old colleague of mine, Neil Simpson had arrived to ride two legs.  These two joined us for dinner, as did Grace Maddox from SweetSpot who had handled all of our logistics superbly from afar.  Keen to see the Tour up close, she and Andy had driven up together from London.  It made a big crew for our al fresco dinner at the Lobster Pot.

We got lucky sandwiching dinner in between rain storms.  That night, there was yet more cataclysmic thunder.  It was one of those “Toto, we may not be in Kansas anymore,” storms.  Very high winds rocked the RV like a cradle and I could see the shape of the lightning flashes through my closed eyelids yet again.  Allegedly, this is unseasonal.  It didn’t feel it any longer.  The forecast for the next day was grim to start with, maybe a bit better later so I was looking forward to a lie in.  But not really to riding.