Simon and Rich joined Hugh and me for a second day.  Rich’s legs had survived the previous day miraculously and we rolled out from in front of our weird little hotel by the ferry port on time.

We’d chosen to put in another short cut today, this time to stay safe.  The weather forecast said there was a risk of catastrophic rain and flash flooding later in the day around Aberdaron.  So we chose the fastest route off Anglesey to give ourselves a better chance of staying ahead.  This meant ironing out some zig zags towards the coast and sticking to the old A5 which was quiet since the new expressway had been opened.

The first part of the ride out of Holyhead stuck to rural lanes still through Four Mile Bridge.  A few miles further though, we joined the A5 to tap out the best rhythm we could manage, downwind, the rain storms in the back of our minds.  We explained slipstreaming to Rich, but the train we tried to assemble kept breaking up so we relaxed and went as fast as we could whilst cutting the wind one by one.

Not far off the Menai Straits again, Rich started giggling.  “I know where we are.  We’re just about to pass Llanfairpwllgwyngyllgogerychwyrndrobwllllantysiliogogogoch.”  I’d been to Bø, in Norway before and learnt to pronounce that:  say bear, cut the ‘air’ sound off.  Maybe I’d learn this too?  We got to the little town, hopped off to see the famous station sign and Rich demonstrated.  Why I thought I’d be able to learn it I don’t know.  Certainly no chance before the rain came anyway.  We pressed on. 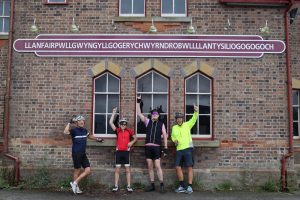 I’m sorry, I didn’t catch that

We had a coffee stop overlooking the fast running Straits, the Menai bridge away to our left.  It was grey, cold and spotting with rain but so far nothing bad.  But it was cold and Hugh’s thumbs were shouting at him again.  Hugh climbed back in the cars and the rest of us crossed back over the old bridge again, retracing yesterday’s steps.  Up and over a hill and down through a calm looking marina and we were heading now for Caernafon. 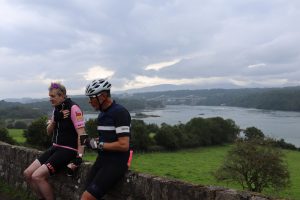 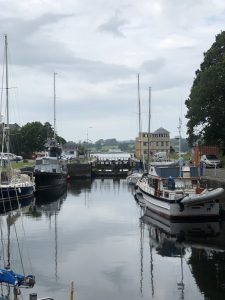 The sun popped out for us as we wriggled through its ancient alleys, the castle looming above us.  Out of Caernafon, a cycle track hugged a narrow gauge railway for several miles, but then it was onto the A 487.  Somehow, there was a tailwind here too which made the miles pass quickly until we came to a fork.  Our route was straight uphill to the right.  My computer told me that this climb came in three parts with a little shelf between each one.  It topped out above 250m which is hefty enough, and the ramps seemed steep, though I couldn’t tell exactly how steep.

Simon, ever the planner, called for a little drinks break at the bottom to gather our resources.  Fruit pastilles did the rounds.  Rich looked a bit grey.  Simon looked a bit grey.  Cars came and went.  Eventually we had to go – the hill wasn’t going away.

The first pitch was labelled 17% at the bottom – not too bad in the great scheme of Welsh gradients – the issue was it went on and on without letting go.  I was used to this by now, and I didn’t find it easy.  Simon weighs a whole lot more than me and steep is his enemy.  Rich had never seen anything like it.  I got to the top of the first ramp in the lead and had enough time to turn around and snap Simon and Rich behind me. 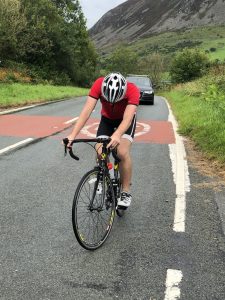 Rich not so much

Simon pedalled off on the flatter step between the ramps.  I snuck in behind Rich to give him some encouragement on the next one and we crept up to it.  It looked just as bad.  It soon felt like Rich had far too few gears.  He was struggling to turn the crank.  I slipped past him to give him something to aim at and pedalled up slowly for him to follow me.  Unable to turn my neck very well, I didn’t notice him slipping behind.

I reached the second flatter section and Rich was nowhere in sight, below the ledge presumably still.  I got off again and went to the other side of the road so I could see back around the bend and down to see if he was ok.  There he was, still struggling.  It was a stunning view behind him and it was too good an opportunity to miss capturing man’s struggle against nature.  So I snapped him again in his moment of greatest despair.  He saw me and redoubled his effort – immortalising himself in the process. 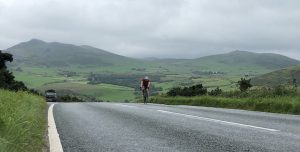 He was grey with effort by the time he got onto the shelf.  I shared the bad news:  there was one more ramp to come.  And the good news:  it didn’t look as steep if I could read my Wahoo correctly.  He gave me a grim smile.  We took a moment.  We set off again.

The last step was indeed easier than the others.  We were high in the wilds now.  The wind was picking up and the skies were dark, but it was still dry.  I stayed with him the whole way to the top and, by and by, Simon was there waiting at the summit.  We climbed off again beside the road.  Rich, breathing hard, managed a croak.

“That’s the hardest thing I’ve ever done,” he said.  It probably wasn’t?  It was something he wasn’t used to.  You get good at what you train for.  He would swim hard enough that he threw up after training.  That sounded harder to me, but I didn’t tell him that.  I let him get his breath back and enjoy his achievement.

The rest of the peninsula was a doddle by comparison.  We stopped at a pub late in the ride beyond Morfa Nefyn.  Rich ordered gin!  We stayed far too long, enjoying the snug surroundings but letting the weather close in on us.  BY the time we left, we got very wet.  But it was warm rain.  There were no flash floods.  And we’d done a big hill together. 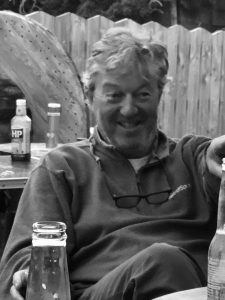 Good spirits in camp in Aberdaron