My old school friend, Simon Kemp had arrived for supper the previous evening, together with a much younger member of the Tour of Britain crew.  Rich is 22, a national level swimmer but not a cyclist.  The furthest he’d ever cycled before was 50km.  He was riding a heavy bike with too few gears that’d he’d been bought for his 12th birthday.  Rich seemed good spirited and fun.  But maybe undercooked for the challenge ahead.

Simon I’ve known for 45 years.  We played in the same sports teams throughout our time at St Paul’s School in London. The last term was very memorable.  We were both sitting Oxbridge exams which in those days meant staying on for one term after A Levels.  For us this meant rugby. 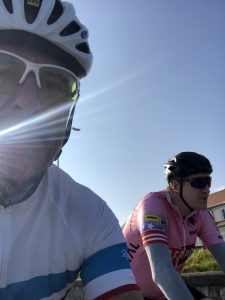 St Paul’s were founder members of the Rugby Football Union in 1871.  Only nine founding clubs remain including St Paul’s.  In all those years, we’d never won all of matches.  In my last term there with Simon, we did.  I remember moments from individual games as if they were yesterday.  And I still see other members of that team – but Simon is the guy I see the most.  At 6 foot 8 inches, he won a lot of lineouts.  He’s a bit more stooped now and also a bit heavier.  Not an ideal frame for cycling, you might think, but in many ways, he’s my cycling mentor.  He started cycling before I did and had ridden the mythical Etape du Tour – a mountain stage of the Tour de France played out on closed roads with ten thousand amateur cyclists riding.  He persuaded me that, physiologically at least, there was no reason I couldn’t do it. All I needed to do was 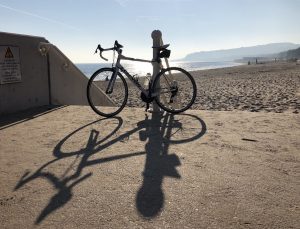 With these strategies in place, Simon reckoned, a finish in this legendary cycling was mine for the taking.  I signed up.  I followed Simon’s advice.  And I finished the 2011 Etape having crossed the Col du Galibier and climbed Alpe d’Huez.  I almost burst into tears crossing Galibier.  It’s 2,642 metres high, 35 km long, has a vertical ascent of 2,100.  That’s more than 3 Bealachs!  But it wasn’t Bealach at all.  It was amazing.  It changed a lot for me, and I’d never have done it without Simon’s encouragement. 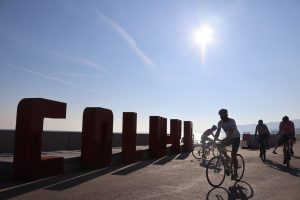 Starting out from Colwyn Bay

Back to today, as I surveyed the route downloaded on my new bike computer, it showed 150km and over 2,000m of climbing.  I was feeling strong enough that morning.  The pills I’d bought the previous day seemed to have calmed my guts down finally.  But I was still weaker than I should have been and a loooong way still to go.  Simon was undercooked having ridden no more than 80k for several months.  And Rich – as I said – was a novice.  We put our heads together with Hugh and decided it was best for all if we put in a short cut.  After crossing the Menai bridge we’d go straight on instead of turning right.  By doing so we cut the eastern peninsula on Anglesey and reduced the ride to a mere 133km and 1,700m.  This still felt like a long day. 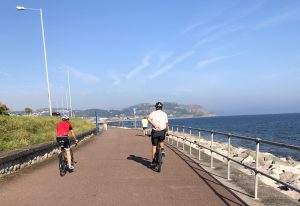 But what a fantastic day it turned into.

We rolled downhill from the rugby stadium to the front.  Colwyn Bay was at its postcard best.  Sea glittering in the early morning sun, white buildings bright against the blue, gentle breeze and a lovely temperature.  It couldn’t be improved.  We took some pics.  I gave Simon a brotherly cuddle and we set off .on the bike path on the front.  This turned into a gentle climb up and over a headland and then a sweeping descent in Llandudno which – if anything – looked even better.  The wide Esplanade and the elegant buildings were looking very relaxed in their sheltered, sunny haven.  Behind them, the Great Orme hunkered down, pale rocks twisted in the morning light and daring us to come and have a go if thought we were hard enough. 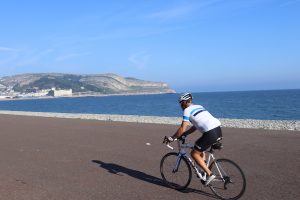 Llandudno – Great Orme on the right

It turned out we were hard enough.  Without a doubt my favourite little sector of the tour to date was the road around this massive cliff.  Never too steep, always stretching ahead and announcing itself very clearly, one-way traffic, stunning views back to Llandudno and out to sea, riding the Great Orme is a total joy.  I was feeling well and strong for the first time in days.  I don’t think I’d known how poorly I’d been, but now I was restored I felt like Superman. 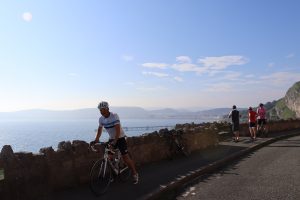 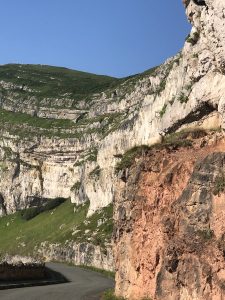 We came to some steep hairpins that weren’t on our route but climbed high up to an even better viewpoint.  Shall we do them?  Hell yes!  I videoed the others going back down the hairpins, took a photo or two, set off two minutes behind them, then caught them on the climb, helped along by a gentle tailwind!  I never catch anyone on a climb!  If I’d been a child, I’d have been wriggling with glee. 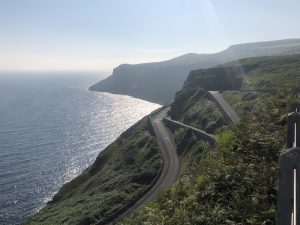 Over the top, round the head the wind changed to a head wind, slowing the descent to the next beach.  The route said take the cycle path along the beach, but it had been destroyed in a storm and was impassable.  But it told us that straight away without the usual painful slog into a dead end.  Excellent! 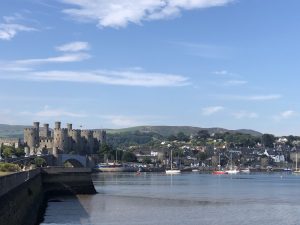 Back on the road then and quickly into to Conwy.  Conwy Castle was satisfyingly complete and sturdy.  As we stood and admired it from afar, Rich pointed to a tiny blob of red on an otherwise white terrace of houses across the bay from where we stood.  It was, he said, the smallest house in the UK.  When we got there it was really small.  The perfect day to have a 6’8” former lock forward in your party.  Simon dutifully posed for the picture of the tour to date. 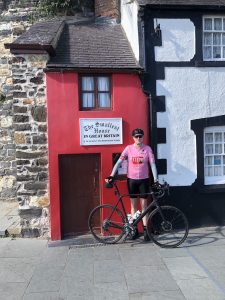 Coming out of Conwy there’s a very busy road but there’s also an ingenious cycle path that runs up, around and over the headland, twisting its way to and fro around the road.  My aversion to cycle paths is now pretty well set, but this was excellent.  Because of its twists, it was an obstacle course and a test of bike handling, but it always felt safe and that it is the key thing. 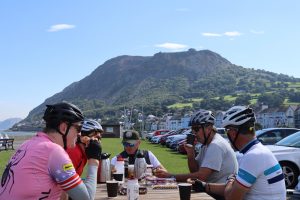 We had a long, chatty coffee stop in the sun.  Simon and Hugh had met before, but didn’t know each other well and they were hitting it off superbly. Both of them are clever and witty and they were well engaged in about three different topics at once.  Finally, we shut them down for a bit and set off for the Menai Strait and Anglesey.  Brian, our guide the previous day, had told us to expect a “single track road” at this point.  I’d wondered what he meant.  He meant a single track road!  Twisting up and down the hillside between high hedgerows, this lane felt like a green bobsleigh run.  Barely room for one car, it seemed cars themselves chose not to use this little road.  Cyclists did and we kept our wits about us to avoid people coming the other way away from Bangor.

Successfully through the lane, we came to Bangor itself, and then the Menai Bridge.  Renowned for the current that runs under its span, the bridge itself is a spectacular piece of engineering.  Bridges that span the sea rather than a river always seem more dramatic to me, and this won delivers.  High above the water, the feeling of vertigo is there and the wonder of the raging current adds to the adventurousness.  It’s not long though, and moments later we were on the island and taking our shortcut.

Straight uphill, I climbed strongly, feeling really good still and – a little anyway – regretting leading the decision to cut off Anglesey’s left ear, Vincent van Gogh style.  A few quick kilometres of main road later, we reconnected with the route and the deed was done.  Still rolling well, we got to another sheltered, sunny spot for lunch on the beach. 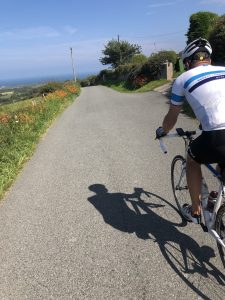 By this stage, Rich was already far beyond any distance he’d cycled before and his legs were feeling it.  We decided to do the next sector calmly and steadily.  Rolling climbs – almost Cornish again – followed down roads and lanes with the occasional stunning view of the sea.  Hedge rows overgrown with bright orange Crocosmia brightened the ride and the sun continued to keep us warm.  At the bottom of a narrow descent, we rolled gently into a car park at Cemaes Bay where we’d agreed a third stop – this time for team icecream.  Cones in hand, we had a discussion about the last sector.  There were two options.  First, we good put in a second short cut, follow the A5025 which would be gently rolling, quick and short.  Second, we could follow the route through a w shaped set of lanes which took us closer to the sea, away from traffic, but promised to be much hillier and much tougher. 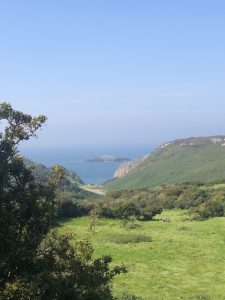 We left the decision with Rich.  “In for a penny, in for a pound.  Let’s go the long way,” was what the answer.  It proved an epic choice.  The roads were tough – tougher than I’d expected.  It wasn’t quite Scourie to Ullapool, but it had that fairground ride feel again:  up, down, around, up again, narrow, poor surface, sudden changes of gear.  Difficult.  Rich must be part made of carbon fibre because he didn’t buckle despite the stretch of never having been anything like this far before.  We had the option to go right down to beach for a pub stop, but I vetoed it because it still felt too far from the finish.  We battled on through the evening light and, finally, came back onto the main road that we’d shunned.  With only a trivial mostly downhill section to go before Holyhead, we did eventually stop at a pub.

Buzzing with exertion and pride at a tough day virtually done, I went inside to get the drinks in.  It took a long time to get served and whilst waiting an old local asked where we’d ridden from that day.

“Oh, just round the corner then”, he replied.

“We’ve come the long way, hugging the coast,” I fought back.

I decided I wouldn’t tell him about the Great Tour.  I’m not sure it would have impressed him and besides, I was thirsty.

Fed and watered, we got back in the saddle and finished in Holyhead buzzing at our spectacular day.  It was fantastic to be finally back on form.