We had an early start today, fearful of getting to the start on time through the Liverpool traffic.  It wasn’t nearly as bad as we imagined and we had time to relax with the Fab Four by the Ferry terminal.  I channelled George – looking for a bit a serenity after yesterday.  My clean up with Toby seemed to have gone well.  I’d had a good chat with Jake in the car as well.  For someone newly out of University, Jake is wise beyond his years with respect to people.  So this was all good. 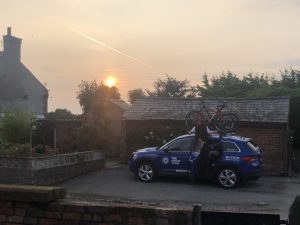 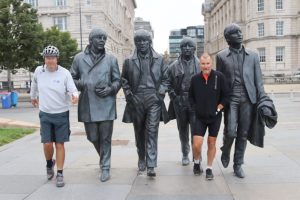 My guts however were worse than they ever been.  Meloxicam was low down my suspect list now.  The bad water at Newton Stewart was further up it.  But I also suspected I had a little hernia now.  Could that be contributing?  Whatever it was, I’d had two visits to the loo before leaving the camp site, and standing in the square, listening to “Within You, Without You” while staring hard at George Harrison’s statue, the cramps were still there.

We were joined today by three day riders for our ride to Wales.  Doug and Brian were buddies.  A second Brian was Great Tour royalty.  He’d ridden big chunks of each of the last two editions.  In his seventies now, he is still super-strong and does things like ride to Sweden for fun.  He knows the area we were cycling into and was going to be our guide for the day. 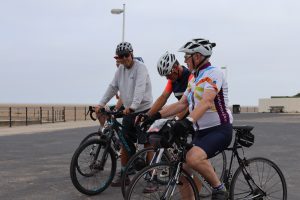 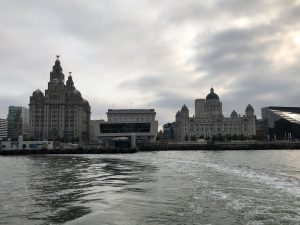 We trooped onto the famous Mersey Ferry and were whisked across the river.  The ferry was virtually empty.  Covid strikes again.  On the other side, we set off along the sea front towards New Brighton with Brian explaining all he knew of the local social history, the impact the Vikings had had on the Wirral, the advent of tourism, the rivalry with Blackpool that lasted until the WWI when New Brighton’s tower was left to wrack and ruin and a familiar refrain “this town used to be……”.  It was Whitehaven all over again in many ways and facts started falling out of one ear as they went in the other.  I should have been taking notes. 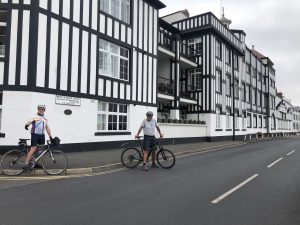 The former Mostyn School in Parkgate

The classic “used to be” town was Parkgate.  Once a major port, the river had been canalised, the port silted up and the port withered.  The salt marsh in front of used to be the middle of the channel and the border with Wales.  You could now walk to Wales before you got the river.  It was all very confusing.  History lesson over, we remounted and cycled into Flint for our tour of Wales.  As we crossed into Flint, Hugh said:  “Right Rob, this is it.  This is where it all starts.  So far this has been a six week training ride for a three week tour of Wales and the West Country”.  It was meant as a gee up, but my stomach quailed.  Some of the legs ahead were very tough.  I needed a confidence boost. 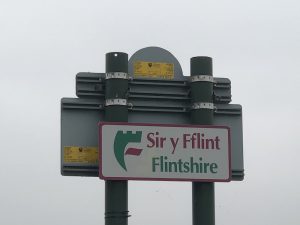 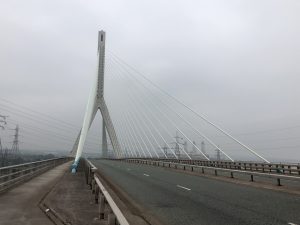 We crossed a spectacular bridge then had a difficult mix of cycle paths, A road and dual carriageway to negotiate through mist and fine drizzle before we stopped for lunch in Flint and the weather cleared.  What didn’t clear was my cramps.  At the first bite of food, I was in discomfort again.  I took myself off to a pharmacy and got some loperamide to bung me up and an IBS pill I’d never heard of called mebeverine for the discomfort.  They started working quickly, mercifully and we left Flint behind us on another busy A road. 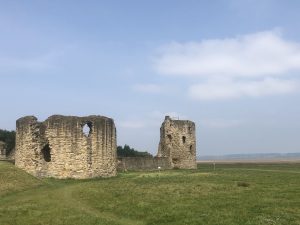 I got on the front and set the highest pace I could muster. I wanted to take my mind off my illness and get off this busy road as soon as I could.  It worked on both counts.  We now had miles of beach side cycle track – small black dogs aside, a good upgrade from the A548.  Prestatyn and Rhyl fell behind us and we stopped for an ice cream in the sun somewhere – it may have been Kinmel Bay.  Wherever it was, I risked everything and went for liquorice and blackcurrant, preceded by another stomach calming IBS pill.  For the first time in days, my stomach accepted the food gratefully.  It may have been the most delicious thing I’ve ever tasted.  I’d asked Brian what flavour he wanted.  “Anything” was the reply.  I may have gone a step too far with Unicorn.  It looked a bit like it was aimed at the toddler market, but he ate it.

Before long, we’d arrived at Colwyn Bay.  I’d finished the day feeling much stronger.  Hopefully, this was the end of feeling grim and being grumpy with people.  We had a ride past of the Colwyn Bay sign and this turned into a delightfully daft circular formation ride in the sun – all of us giggling stupidly. 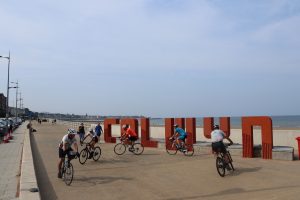 We finished with a long drink at the pub and a debrief of a much better day.  My school pal Simon “Mario Kempes” Kemp was due to arrive that evening for a couple of legs.  I was really looking forward to seeing him.