Today, just Hugh and I lined up on the start.  The thunder the night before had left debris on the road coming out of Barrow, but the roads were easy enough.  We were quickly onto steep sided country lanes, village greens and views out over Morecambe bay.  Somewhere out on those sandflats was the place where so many Chinese cockle pickers had died, surprised by the tide.  The mudflats didn’t look treacherous, they seemed benign.  I guess that’s how it happened in the first place. 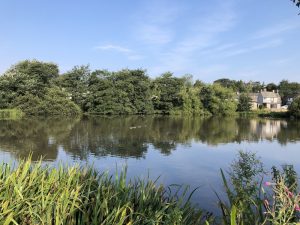 Village pond outside Barrow.  Skies clear after the storm 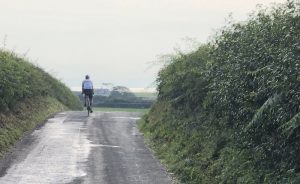 I’d worked out how to use the Wahoo fully now.  A bit of time to myself was all it took, it’s not hard.  And Rob was right, the mapping is much easier to follow than on my old, exhausted Garmin.  Arriving in Ulverston, the map said turn right.  Hugh said keep going into town though, there was something he wanted to show me.

It was worth it.  Ulverston was Stan Laurel’s birthplace.  There is a statue of him and Oliver Hardy in a little square.  It’s a really good one.  Someone had put Covid era masks on the two figures.  We left them in place – it seemed disrespectful not to – bot you could see their personalities beaming out of them through their eyes and foreheads alone.  Hugh and I donned our own masks and posed rapportfully for our photo with them. 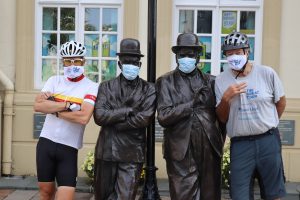 Rather than retrace our steps, we took the A590 out of town back towards the coast.  It was quite busy.  Mercifully, we intersected the route where it cut inland avoiding a dual carriageway.  This lane was named “Alpine Road”.  In case we wondered what that had in store, a steep hill rose to our left.  The lane climbed its shoulder.  I’ve climbed enough hills by now that they are holding less and less menace.  This one was a joy.  Respite from the busy road we’d just been on, this was very quiet.  Stone walls, sheep, babbling streams and the sound of your heart beating in your ears if you listened hard enough were all there was to disturb the peace.  The road forked right and went up more steeply.  Hugh on his e-bike was ahead, but I was feeling strong and climbed as well as I ever have.

Hugh got to the top and got off to wait for me, only to discover I was about ten yards behind him.  “Oh, there you are.  Wasn’t expecting to see you for a bit,” he said, smiling.  With warnings to each other to watch where we were going on the descent we set off slowly.  Immediately, I could hear something ahead.  Round a steep, blind corner we came upon a tractor-mounted hedge cutter that was literally filling the road completely.  You couldn’t have got a whippet down either side, let alone a flying bicycle.  The noise we’d heard was the wall crumbling as the hedge cutter cut too close.  The driver was out of the cab and chucking stones back in the hedge as we spoke.  He had to reverse the rig a fair way to find a space to sneak us past. 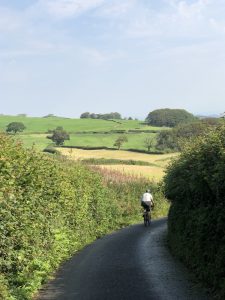 Just below the hedge cutter

Past him and into the lane again, the countryside was stunning.  Dropping sharply between emerald green fields, the stony lane took us all the way back down to sea level again.  A wriggle under the dual carriageway, a sneaky foot bridge across the River Leven and we were onto cycle paths again into a Nature Reserve.  As the path became a lane once more, we found Jake parked up in his best coffee spot yet.  Sheltered by oaks, there was a little gate to a fishing spot and a bench where someone must once have spent happy hours.  The river was still and calm and there was a patch of reeds opposite where a kingfisher was busy.  It felt like being on safari. 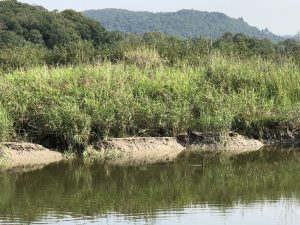 Kingfisher in there somewhere 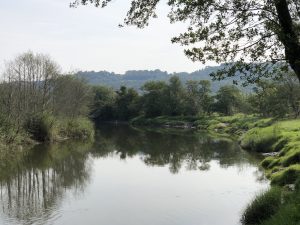 Riding out of the top of the reserve it was back on a main road to Grange-over-Sands.  This was one of the few places I knew in the north west.  In my twenties, I’d worked for ICI Agrochemicals, based in the namby-pamby south.  They entered two teams of four into a competition called “Now Get Out Of That” for a bit of team building and toughening up!  The show was televised, but not during the qualification heats of which this was one.  The premise was give teams puzzles to solve that require a bit of lateral thinking and a bit of daring-do, let them slug it out and see who’s the winner.

So the eight of us got stuck in over two days against a dozen or so other teams and it was a lot of fun.  Memory number one was from day one.  The tasks had taken place on a headland one stop down the railway towards Barrow.  At the end of the day there was a choice:  wait for the train or walk back over the mudflats since the tide was out.  We went for the walk.  There was a barrier.  A shallow stream crossed in front of us – maybe eight feet across.  A guy from one of the other teams took a run at it.  Planting his take off foot went badly – his foot shot from under him and he sliced, feet-first into the stream with water flying everywhere.  A redheaded girl from our team, Jane Hastings, thought she could do it though.  We watched.  We knew what would happen.  The exact same thing happened, but this time with extra blushing.  Laugh? We nearly sh*t.

Memories two and three were the first evening.  We’d been given a Now Get Out Of That sticker to place somewhere appropriate.  My team wandered downhill from the grand old hotel to the station at dusk.  Nobody was around.  I was delegated to shin up the drainpipe, with a bit of a boost, shuffle up the tiled roof above the station entrance and slap the sticker on the point of the fascia boarding.  All went well until it was time to get down.  The jeopardy wasn’t fatal exactly, but I felt a bit exposed and I couldn’t work out how to get a hand hold on anything that would stop me falling.  Eventually, I decided that the only solution was a head hold.  I leant forward, tilted into space, braced with one arm and then leant my forehead against the bit of the roof I had to reach around.  Holding myself steady with my head and my stomach muscles, I managed to reach the drainpipe and shimmy down.  Triumph. 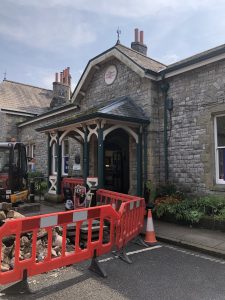 Then it was back to the hotel late in the evening to meet for the final task of the day.  We got to the plenary room to find spooky lighting and people wearing bandanas tied around their heads.  The game was Russian roulette with blanks. Didn’t seem super sensible in a crumbly old hotel with lots of old people staying but what did I know.  Then the guy running the whole let off a smoke bomb for a bit more atmosphere.  The fire alarm went off within three seconds.  Luckily, there were no sprinklers but there were little old ladies in nightgowns and incandescent hotel staff.  One of the organisers was left to calm down the manager, the fire brigade were stood down – but the show must go on, so another of the crew took us all down to the esplanade by the station to continue al fresco in the night.  By the time the third blank went off, the police had roared up to stop the executions taking place on the beach.  Grange had never seen anything like it.  Marseilles maybe, but not Grange. 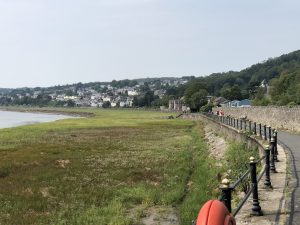 I took Hugh to show him the station portico and the esplanade, then we pedalled off in search of a pub. 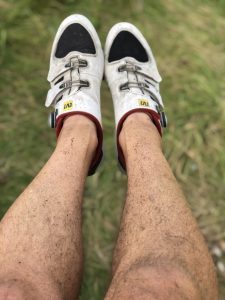 Road scurf on my legs – wet roads from the thunder

I did a good deed for a little boy who was cycling with his family but having a miserable time because he had a flat.  I fixed that, he said a shy thank you, then it was back to the road.  There was a lovely stretch running by the golf course.  I had to wait a while for Hugh here because someone had recognised us from Facebook and stopped him for a chat.  Fame at last.  A mixture of lanes and main road took us to Sandside and a beer at the Ship Inn with a sandwich lunch.  My stomach crampos had gone, or so I thought.  I’d been feeling great all day.  But as I stood up to leave the pub it felt like a battle was starting up in my guts all over again.  I took five minutes to myself, trying to get it under control, took a trip into the pub and emerged again a bit greyer. 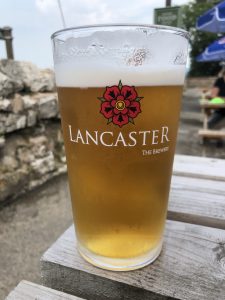 The ride to Morecambe was uneventful enough.  I don’t remember much of it to be honest.  I was inside my head, trying to manage my state again.  What I do remember was coming into Morecambe I hopped onto the wide cycle path / pavement slightly ahead of Hugh who was still on the road.  I was waved down by an old man on a bike who looked distressed about something – maybe he was going to tell me I was riding too fast on the path?  I stopped.

“Can you help me?  Does my saddle look the right height to you?”

He rode a few yards.  I said maybe it could go up a bit, but it was a job for a bike shop really.  I didn’t really know what I was talking about.  Then he said “And when I’m getting off, should I have the bike at more of an angle?”  He went through some gyrations looking very uncomfortable and actually pretty scared.  He didn’t fall off, but he could have.  I helped him a bit.

“You see it’s my 82nd birthday today and both my daughters have persuaded me it’ll be good for me if I start cycling.”  I wanted to tell him that they may have been well meaning but having him start cycling aged 82 seemed a risk to his health rather than the other way round.  What I told him instead was to be careful and to find a bike shop who could help him.  Meanwhile, I had to chase down Hugh because I had the map and he was now miles out of sight.

I found by the Eric Morecambe statue.  It’s a great idea, and a lovely pose of him in full “Give Me Sunshine” flight.  But compared with Stan Laurel, it’s a poor likeness.  Sorry.