Today was rubbish.  There’s no dressing it up.  We’d cut the ride short yesterday to avoid Preston.  We retraced our steps today to Lytham from where the RV had parked up near Preston and started again from there.  Toby’s intel from Paul the day before was that it was seaside all the way today, but when we left Lytham it was main road to start with, and that turned into dual carriageway.  Surely this must be wrong.  I stopped to give him a call – did I have an outdated route on my bike computer?  Nope, that was the route.  It was better later.  Eventually, nearing Preston, there was a pavement cycle lane and we got on it mighty relieved.

A day rider called Ian – one of the commissaires who’d worked on the Tour of Britain – was due to meet us.  He spotted us from a bridge across the dual carriageway and came down to join us on the cycle lane.  He’d flown in from holidaying in Greece literally hours earlier.  We allowed ourselves fist bumps, but that was it.

The other side of Preston the road was a little better and we got into some lanes for a while, but the sea was nowhere to be seen still.  There was however an incongruous Flintstone sculpture on a road island beside a petrol station.  It had been there a while apparently.  It had appeared unannounced and remained there – undefaced at least – for people to lark about in.  We did our duty, got a photo and moved on. 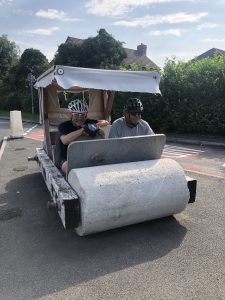 Coming into Southport, we finally had a great road to ride, the sea to our right and a tailwind to push us along.  We cut into town for a break.

We passed a big anonymous-looking mall close to the seafront and the bridge as we headed into town.  We were bound for the grand old main shopping street that Hugh remembered from golf trips to Birkdale.  Whether it was the new mall, Covid, or the general malaise that has hit high streets everywhere, this street had seen better days.  We sat in lovely sunshine and enjoyed a coffee at an ice cream parlour, but the big department store beside it was no more; it’s windows white-washed over. 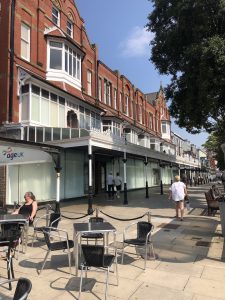 Southport – nothing for sale here

Leaving Southport, the road behind the dunes was closed to traffic.  We had it to ourselves.  Excellent.  The closed road got Ian talking about the one Etape du Tour that he had done back in the noughties.  People were collapsing from the heat everywhere he remembered.  Heat messes you up, was his prescient parting thought as he cut left and headed for home, leaving Hugh and I to soldier on into our own version of a growing heat wave.

At exactly this point, the ride went bad fast.  The first issue was getting onto the cycle path to Formby.  We could see it below the road bridge we were on, running beside a railway track, but we couldn’t see how to get onto it.  We went over the bridge and down the other side.  Nothing doing.  We went back where we’d come from.  There was cycle path sign to Liverpool pointing dead ahead along the road, but Formby wasn’t mentioned as far as we could see.  Sod it, we agreed to just follow the Liverpool sign.  Hugh was on his pedals and off up the bridge ramp whilst I was still fiddling get my feet clipped in.  As I looked up, I did – at last – see the Formby sign off the road and hiding in a hedge.  By now, Hugh was out of hailing distance, the path to Formby looked rubbish anyway, so I pedalled off chasing Hugh to Liverpool.

Five or six km later however, we were well inland, turning further inland and on a path that was poor already and deteriorating.  We had a chat at a fork in the path, consulted my phone and set off back to Formby.  By now it was hot.

I painstakingly took us back through Formby, following the turns to get back on the route and onto the seaside paths we’d been looking forward to.  Somewhere in a housing estate there was a fork and the map took us off the road and onto a path.  It was unpromising to start with and soon became rutted, unridden and hard to stay upright on.  The map said to go straight on at a crossing in the path. But there wasn’t a straight on. There was a right to the beach.  It was foot deep sand.  And left away from the beach.  I tried that.  Also sand.  Unrideable.  I went back to the crossing that wasn’t. Maybe I’d missed something.  I had, but it wasn’t helpful.  A sign where the map said we should go straight on warned us that we were next to a military firing range.  Great. 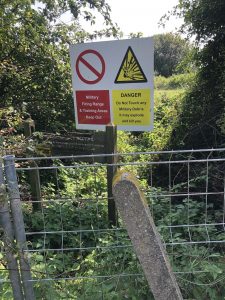 The only option was to get out the way we came in risking a tumble on the crappy path.  Ride with GPS had thrown us another curveball.  Back in the housing estate, Toby appeared.  We explained what happened.  I said we’d go back onto the main road at the other side of town which seemed the only way round this obstacle.  We’d been riding in circles for about an hour.  It was hot.  I was tired, I was also still unwell and I was running out of patience

Back on the main road a couple of miles away, along in the traffic, the heat beating back of the road, I was getting very grumpy.  Hugh spotted Toby’s car taking a right off the main road.  “He wants us to go that way,” said Hugh.  So we followed.  There was a junction.  We could see the car further ahead.  We followed it.  There was another junction.  The car was nowhere to be seen.  I consulted the map.  The route was supposed to be nearby if we went right.  We went right.  Back into another part of the sodding military dead end.  We backed out of there.  We got lost in another dead end, this time in another housing estate.

By now I was completely gone.  The car came back and I started tearing into Toby about where he’d been when we thought he was leading us.  It turned out Toby was completely gone too from the stress of trying to help us out with useless information, so he got out of the car and tore into me straight back.

I had to get out of there before things got any worse, so I got on my bike and rode as hard as I could back the way we’d come.  After two or three minutes, I came to a roundabout, chest heaving, furious.  I looked at the map for the fastest way to Liverpool, found an acceptable looking road and set out to time-trial there.  Shortly, Jake found me in the other car.  Ignorant of the spat I’d had with Toby but clearly aware that something bad must have happened for me to be riding on my own, he said he’d stay close as I finished the ride.

I chased as hard as I could, remembering to watch where I was going and with my mind trying to work out a way back out of the crappy situation.  One of the things that Toby had yelled at me was that he was only trying to help.  I latched onto that.  I needed to start by apologising for tearing into him, tell him I knew he was only trying to help, promise that when I needed help I would in future only ever ask kindly and see where that went.

By the time I got to Liverpool, I had that conversation rehearsed in my head and that made me feel a bit better.  The traffic, another route curve ball, the roadworks, the noise and the heat were still driving me nuts, but I was nearly finished for the day now.

There was still time for me to almost have a disaster.  Within 500 yards of the finish by the Liver Building, I was on a pavement.  I could see it was blocked off at the end and there were cones along the roadside.  There was no traffic.  I turned to go back onto the road, but I hadn’t noticed it was double kerb.  The drop was down two steps – maybe a foot and a half in total – and I hadn’t seen it.  I couldn’t now avoid it, but I could at least hit it square.  So I did, hit the road with a thump, stayed upright and rolled slowly to the finish, heart beating hard. 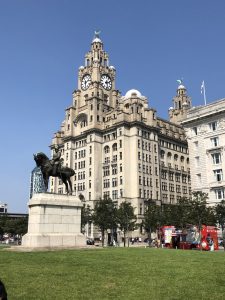 I had an ice cream with the fab four, I snapped a pic of the Liver Building, I rehearsed the clean up conversation with Toby again.  I found Jake.  And we went back to the RV, which was on a farm ten miles away.

The clean-up with Toby later was a good one.  I covered my apology spiel, which he accepted gracefully.  And I was also able to get across how I was feeling under the stresses of being tired, ill still and nervous about being able to finish this event.  I have to stay upright, I hate some of the paths which according to the software are rideable but clearly are not, and I have to stay fit or I’m lost.  That means not being out in the sun riding in circles.  I’m not sure anyone had known how strung out I was.  I’m not sure I did myself.

I know that I felt we were stronger afterwards, but, like I said, it was a rubbish day.