Today was due to finish in Preston, but with a local lockdown declared there, we cut it short and finished in Lytham.  Already a short leg, it was now a let’s finish at lunch and take the rest of the day relaxing leg.  We were joined by one of SweetSpot’s extended family, Paul.  Yet another ex-racer, he led us from Morecambe all the way. 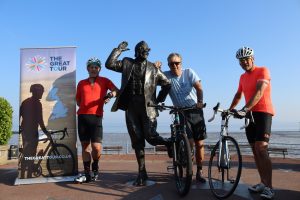 A ferry was shut, adding a few more km back to the route as we had to go up to the bridge at Lancaster.  But it was no hardship.

The sun was out again – NW England was being relentlessly kind to us – but it wasn’t too warm.  The cycle paths were easy, the roads were quiet.  There was flat farmland either side separated from us sometimes by wide verges, sometimes by thick hedges.  A kestrel flapped in a hedge as we approached on a narrow lane.  Torn between almost nailing its lunch and wanting to get away from us it was slow to decide what to do.  I could have reached out and touched it before it flew off into the haze, claws empty.

We had one exciting moment negotiating a flood on the cycle path – a consequence of the thunder that had returned again last night too.  I videoed Paul and Hugh, looking up and putting my phone away when they were about half way through.  It hadn’t looked too deep and Pedalled gently after them.  I hadn’t paid enough attention.  Half way through, the water came above the pedal axle and I wsn’ going fast enough.  I suddenly had to cycle hard just to stay upright against the resistance of the water.  A dog walker stood watching, just about managing not to laugh.

Lost in the Flood 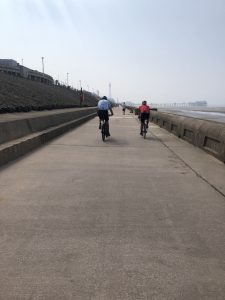 Next it was Blackpool looming out of the haze.  I felt a Strictly ‘at least I made it to Blackpool’ moment coming on.  But I said nothing.  My goal hadn’t changed and it was to watch where I was going and keep pedalling until I got back to the Isle of Wight and then home.  We had the obligatory photos by the tower, then an ice cream and then it was off to Lytham, another pub and some fish fingers. 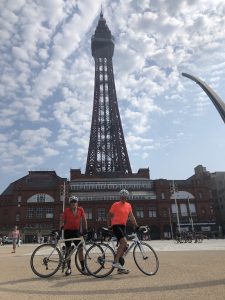 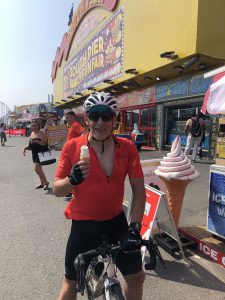 Today was a good rest.  I celebrated by cooking a seafood pasta for the crew.