We had a sunny start to the day again.  Things had looked up since the trials we’d had in most of Scotland.  There was a big crew to join us today too.  A different Hugh had arranged for us to park the RV up at the sports club on the beach in St Bees.  He’d brought his regular Monday cycle gang to join us for the first part of the ride.  Both John and Lyndon from Honister were back for more too.  Adrian had driven over from York to part of it all too. 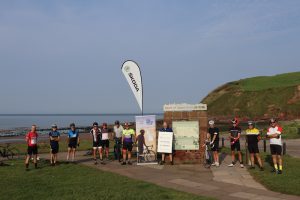 The lanes at the start were narrow, quiet, scenic, rolling.  Everything I could want.  My legs felt good again after my long sleep and my guts, whilst not yet ok, were definitely better than yesterday.  Hoorah. 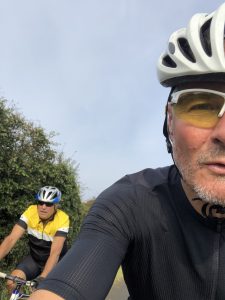 Early doors – Hugh the local riding behind me

Soon enough, Sellafield loomed into view.  The nuclear power station had a bad name as Windscale in my childhood.  Back in the very early days of nuclear power, they nearly had the mother and father of all disasters in the 50s.  They were only saved from making the Lakes uninhabitable by extraordinary bravery, improvisation and a lot of luck.  Through the seventies, they had a series of other incidents – none on the same scale, but serious nonetheless and a PR nightmare.  I think was Not The Nine O’Clock News who announced that there would be no further leaks from Windscale as it was changing its name to Sellafield.  These days, the power station is long since shut down and being painstakingly dismantled.  Processing spent fuel into plutonium still continues.  Whatever you feel about that, it is the most important employer in the area by a very long way.  The people who work there speak very highly of it.  Without it, there’d be no industry for miles. 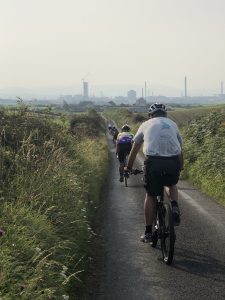 It was strangely beautiful in the morning sun too, snapped from far away at least.  Up close, producing a camera would have interrupted my ride, so I tucked it away and rode the cycle track down to the beach.

A very scratchy section followed behind the dunes.  I had to concentrate very hard to stay upright.  The R3 isn’t made for this and nor are its 25mm tyres.  The further I get into this challenge, the less I want to ride stuff like this.  Staying upright is paramount and it’s more difficult on a bad path. Before too long though, we were on lanes again for the run into Ravenglass.  Hugh’s crew had split by then and we were down to Lyndon, John and Adrian.  A scenic tidal path took us into Ravenglass by the backdoor so that we missed the sign to the coffee stop.  We poked about by the small gauge railway for a moment before working out that we were looking for the Roman bath ruins.  Lyndon split soon after, Hugh’s hands were causing grief again so we were whittled down to just John and Adrian to ride with me. 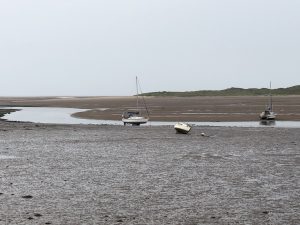 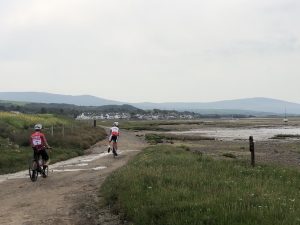 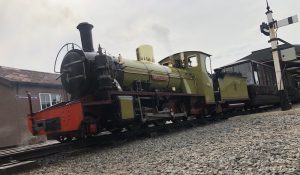 John, retiree that he is, is still a strong cyclist.  But he had to cycle back to the start when he was done for the day.  He kept saying he’d turn off soon, but there was always one more cycle path that he needed to make sure we found.  Try as I might to claim self-sufficiency, John was on a mission to guide that wouldn’t be diverted.

paths.  Eventually, we reached a spot where John admitted the exit was “a bit scratchy”.  A short gravel wall faced us.  Adrian tried to get out of my way by getting off the bike, but in doing so he occupied nearly every bit of road.  I sneaked past and surprised myself by killing the climb.  I was much stronger than I’d been.  I’d never have got up that track on day one – no chance.  And I got up much more easily than my two companions too.  Unexpected, but good. 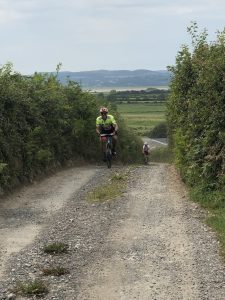 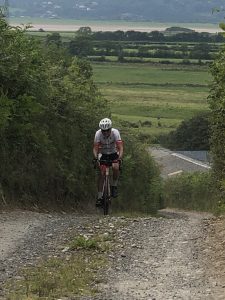 I really wanted to finish now.  Thunder was forecast and I wanted to get home and clean long before then.  The last few km to Barrow took longer than I’d thought.  The main road was quickest, but John found us some back roads where we stayed out of the traffic.  Without ever intending to, he’d taken us all the way to Barrow.  We stopped for a beer together at the finish.  Adrian was taking the train back to the start and then driving back to York.  John intended to ride it.  He said he might go the short way, over the hills.  Made of iron, these Honisters. 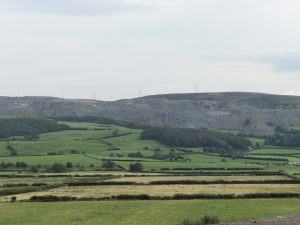 From Bombay, to Santa Fé, o’er the hills and far away 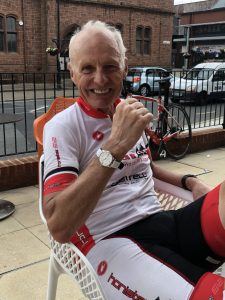 Back at the RV I was tired.  There was no beach to go for privacy this time.  I feel the need for my own space more and more but don’t always get it.  It’s not ideal, but it’s my home for the trip and it has some comforts too.  Like getting through the shower and coming out steam cleaned.  Or eating the food that comes out of the kitchen, mostly courtesy of Hugh.

Tonight though it was shelter.  The thunder arrived in the night.  I’ve seldom heard louder and you could tell the shape of the flashes from behind closed eyelids.  I was tired enough that the closed eyelids won and I had another good sleep.