Today was basically a rest day at the start of several back-to-back easy days in NW England.  Just 70 flat km from Dumfries to Carlisle.  The weather was lovely as if Scotland, having been pretty mean to us throughout was now admitting we’d earned some respite. 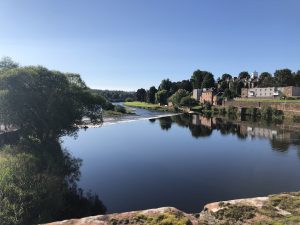 The fly in the ointment was I now had bad guts.  The stomach cramps that had started yesterday had got worse.  I’d been using meloxicam which is a heavy duty, once-a-day painkiller for about three weeks now.  It has a reputation for messing your stomach up, so I’d been taking omeprazole too to head that side-effect off.  But I wondered whether my discomfort was related.  I’d ditched the meloxicam this morning and gone for codeine instead.  That meant extra fruit for breakfast to counter codeine’s binding effect, but the extra fruit was going to stir my guts in the meantime.

I’d first come across meloxicam after my knee surgery ten years earlier.  I’d started cycling to make my knee stronger again and shed some weight.  I was going skiing and I knew my knee would hurt still, so I went to GP, Nigel Savage, for advice.  He confirmed the damage to the capsule would make my knee hurt, for sure, but it wouldn’t cause any more damage.  I had two choices:  grit my teeth for a week, or take painkillers.  We settled on painkillers and he prescribed meloxicam as the biggest, baddest painkiller in his armoury.

Then he asked:  “Do you ever suffer from an acid stomach?”

“Not really,”  I said, and then paused and thought and added “Not unless I’ve had a complete skinful.”

“You’re going with Sarah and Soren aren’t you?” he asked.

“Then you’ll need some of these as well,” he concluded, meaning the omeprazole.  He knows his patients so very well!  And he and his wife Jane Bowry have saved my wife Jane’s life between them too.  She had a mole that Nigel didn’t like – he’s made skin one is his real areas of deep knowledge.  Jane went to a specialist, who gave it the all clear.  But between them, Jane and Nigel questioned that and the mole was removed.  It was a malignant melanoma, but because of their care it had been caught so early that it had had no chance to metastasise.  Thank you again guys and you’re always welcome to dinner as you know.

So, worried about my guts but taking action to sort it, I lined up to ride to Carlisle in beautiful sunshine. 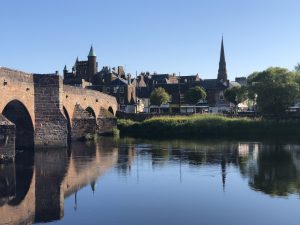 Rob was due to head for home after today and that was another downer, but it was easy to forget as we followed easy, pretty cycle paths and lanes out along the river Nith.  There was a cyclist ahead of us, enjoying his morning ride.  I weighed up his speed and ours and reckoned a capture was nigh.  As we closed, I put more effort in down a little hill, paused on his wheel for a moment and pushed to go past.  I remember this so clearly, because it happens so infrequently.  Rob videoed it as a rarity.  When he caught me moments after, he said “As your leg protection officer for one last day, I am required to advise you to slow down a bit.”  We had a giggle, then kept the pace quite high anyway.  I wanted to make sure the cyclist was left well in our wake.  We rode on side by side for several km down a flat lane, fields and estuary views flashing past.  Rob then needed to stop for a pee, and as we backed off I looked behind.  The cyclist was still there on our wheel.  Grr.  We let him go at that point and normality returned.

The view to our right got better and better.  The Lake District lurked in the blue distance beyond a sparkling Solway Firth. The tide was miles out, the sunlight sparking and shattering from the little rills of seawater left on the sand.  SOmebody was riding a horse across the beach in the middle distance.  It was too beautiful to simply ride past, so we pulled in to enjoy it. 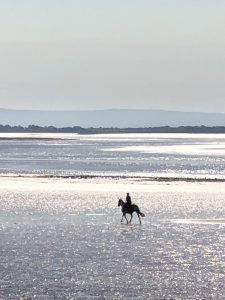 Riding a different steed, Lake District in the distance

We were right beside Powfoot golf club.  A three ball had just played in to the green next to us and were wondering up the fairway.  One of them had hit quite close.  As we standing waiting to see if he’d make his putt, a older man and a younger man walked up to us.  The older guy was the spokesman, a big hole in the elbow of his rust-coloured sweater.

“What are you doing”, he asked in a super plummy, Tim Awfully-Nice-But-Dim kind of a voice.

Rob became my modesty-protection-officer now, maybe still guilty about nicking my groupies at the Caves of Smoo.  “We’re riding the entire coast of Great Britain.  Robin here is doing the whole thing.  He’s on his 36th straight day”.

“Travelling light,” said Tim, suspiciously.  Rob explained we had some back up, and they were taking our gear from stop to stop.

“Oh, quite light then,”  said Tim.  Before I had the chance to offer him my bike so he could have a go, he said, crisply, “You’ll have to excuse me.  There’s my wife and he strode towards the beach yelling in a clipped, aristo boom, “Catherine, Catherine, Catherine”.  It was a sturdy ex-military looking march.

Meanwhile the three ball had been on the green throughout our exchange.  At the Catherine moment, the guy with the short putt had had to back off.  He got back down over it.  I muttered to Rob that he’d leave it short.  He didn’t, but he did miss way right.

We rode on to the distillery in Annan for a coffee stop and to meet up with one of Rob’s friends, Emma.  By then, my guts were feeling grim and I wasn’t feeling the regeneration that a rest day should bring.  The ride from Annan to Carlisle was flat, but basically main roads.  The best bit of the day was long gone.  I rode in the wheels behind Rob and Emma – who rides strongly – but I was just turning the pedals to get to Carlisle, not enjoying myself.

Through Gretna and over the bridge next to the Motorway and we’re back in England.  There was no sign to mark the point, just as there had been no sign for me on the route I’d taken into Scotland in the first place.  Maybe I hadn’t been there after all?  I no longer had a tan, I was thinner and I had some memories but none of them included a Welcome to …. sign.

My Garmin had packed up a week or so ago after the battering it had taken from the weather.  Toby was going ahead to get me a new Wahoo for the superior mapping. But right now I had no way of gauging where we were or how far we had to go.  I know it’s not far, but right now every km feels like forever and it’s hurting.  We said goodbye to Emma, who turned for home and immediately took a wrong exit at a roundabout outside Carlisle.  It added a couple of miles and darkened my mood.

By the team we arrived at Carlisle Castle, I was feeling battered yet again.

I doubled over at the finish.  The ambulance crew who had followed us in Yorkshire had turned up again.  They could see I was in dreadful shape.  They got me some paracetamol.  What I really wanted was to lie down on a bed and sleep, but the news was that the B&B wasn’t open to us until 3:00.  So it was off to the pub for lunch.  Sitting in the sun was the easiest option and staying out of enclosed spaces in the NW England seemed sensible given a Covid spike. 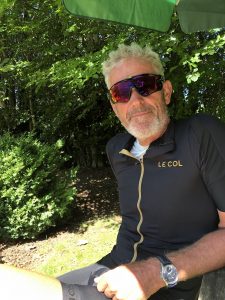 Eventually I could tolerate the heat no more and slunk inside unannounced for some shade and peace.  I ordered a double espresso, but I nodded off anyway.

Toby arrived with my Wahoo and asked how I was doing.  I told him not well. 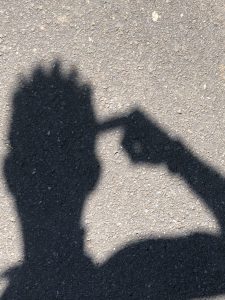 I must be dreaming – Rob doing a farewell Bart Simpson impression