We were joined today by Martyn Craddock, trustee at Ambitious About Autism with whom we’re hoping to build a relationship, and also Jonathan Counsell from British Airways.  Jonathan and his BA cycling crew have been Great Tour supporters in the past.  I first met him in 2015.

Today’s ride was a tough one.  It was scheduled already to be oversized at >140km, but it grew bigger on us.  We’re having some navigation problems with Garmin, so went on unscheduled detours more than once, plus a ferry was shut, plus the wind was super-strong – mostly helping to be fair, but when it wasn’t OMG.  We ended up doing 165km, and with ferry waits, lunch and coffee stops we were out in the sun and the wind for 10 hours. 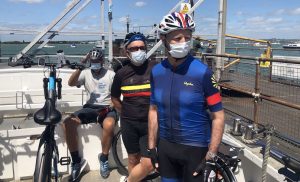 Waiting for the ferry to leave for Hayling Island.  Hugh, Martyn, Jonathan.

Martyn is my new favourite person, and his backside my new favourite view.  He’s a very strong rider, he pays attention to what’s going on around him and he towed me through the worst of the wind.  I think he stayed smiling too, though maybe I haven’t yet learnt to read the mannerisms of his magnificent lockdown moustache.

Both he and Jonathan soldiered through this tough day and stayed smiling.  Top sports. 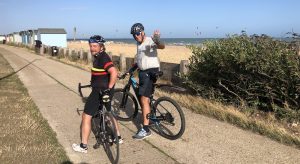 Martyn and Hugh, Shoreham. Kite surfers in the background

I asked Martyn what his favourite day on a bike had been, and it turned out it was the same as mine.  We both rode the Etape du Tour in 2016 which went from Megève to Morzine.  That ride had utterly breath-taking scenery, weather was great, I rode well for me, and we had a glorious Franglais dinner afterwards at the home of the French in-laws of one of my riding buddies.

But it was also part of an unforgettably emotional trip.

I travelled with Simon Kemp.  Simon is an old school buddy and cycling mentor.  He is also head of sports medicine at the RFU, so he knows physiology and is a good advisor.

He is married to Trudi.  She is also a doctor and had a very senior position at one of London’s biggest Trusts.  At an event at the hospital in late 2015 she suddenly felt unwell and collapsed.  She had had a brain haemorrhage which would have killed her had she not been at hospital.  She was operated on immediately and survived, but went into a coma for over four months.

Simon and his two boys somehow survived the stress of having Trudi so very ill for so long, hoping for a miracle, pulling together and working out how to play the cards they’d been dealt.

And they got a miracle.  Against most people’s expectations, Trudi woke up in April.  Astonishingly, she was immediately far more functional than anybody could have expected.  Today, she is very nearly fully recovered.  Her recovery has amazed doctors and friends alike and she has spoken about it in public to big audiences.

On my French trip with Simon, I was helping use the bookings that he and Trudi had made for themselves before her illness that he, superstitiously, had not wanted to cancel.  Simon was sad that she wasn’t yet well enough to be with him, but he was overwhelmed with gratitude at having her back.

We drove down from the Alps to Mont Ventoux and rode up it the day before Chris Froome had to run up; and we cycled around its feet for a few sunny, lavender filled days.  We had many conversations, he and I, about our pasts, about Trudi, about her recovery, and about his hopes for their future.

People can change after a brain injury.  One of the features of new Trudi, according to Simon, was that she was even funnier than before.  If you got her going, she would laugh and laugh.  We thought maybe she could launch a new career in comedy:  “Hi I’m Trudi.  I had a brain injury, so I’m looking for a new challenge.  I thought I’d try stand-up.  The problem is, I can’t stand up”. 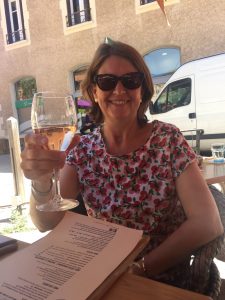 She can now.  In fact last time I walked with her in a Twickenham crowd I couldn’t keep up.  Riding is hypnotic.  It can transport your mind to unexpected places.  This tough ride to Brighton reminded me of the joy of the trip to Ventoux, and of Trudi’s strength.

It made me pleased to be alive. 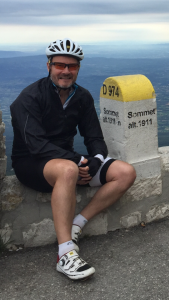 Glad to be alive – on top of Ventoux