Leaving for the IoW Ferry at 04:45.  Been awake since 01:05, my mind thinking about nothing but cycling.

Andrew Ridgeley of Wham! was scheduled to ride with us.  He couldn’t ride when it came to it, but still came to see us off.  Immaculately presented as ever.  He’ll ride later I suspect.  Kind of looking forward to riding with him – the issue is he really rides well and will show me for the carthorse I am.  Especially up a hill. 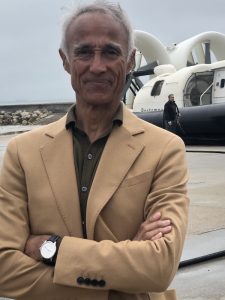 The person that did join us was pocket-sized force of nature, Pippa York, formerly known as Robert Millar.  As Robert, she won the King of the Mountains classification in the Tour de France in 1984 and would have been GB’s first ever Grand Tour winner in 1985 but for Spanish skulduggery on the penultimate stage in the most infamous day in Vuelta history.

Robert disappeared completely from public view in 2000 and only re-emerged in the public eye as Pippa in 2017.

She is now making a splash again in cycling journalism and commentating.  That’s how she knows the crew I’m riding with.

So I rode for the day with a bona fide cycling hero.  And what a total joy it was.

Off the bike, she is simultaneously feisty and humble, gentle and steely.  She rides for a children’s hospice near to where I live.  Her stories of their work would bring a tear to a glass eye.

On the bike, she’s fantastic to ride with.  She has the skill that all pro-riders have of knowing her surroundings completely and handling a bike like it was a limb.  Seeing pros change their clothing while riding always amazes me.  Watching her balance makes you think she could probably cook an omelette while leading out a descent.

There’s a tough climb coming out of Ventnor called Black Gang.  Pippa was about 50 yards up the road from me and spinning gently in the mist and the drizzle.  It occurred to me that this might be my one chance to take the KoM points off a multiple Grand Tour KoM winner.  So I buried myself to get on her wheel.  If I was going to take the climb, I was going to have to go again.  I didn’t want to go too early, so I waited but there was so much mist that it was tough to tell where the top of the climb was.  I stayed patient, then saw the top 15 yards ahead!  Now was the time!

When it came to it, she wasn’t racing.  If she had been, she’d have been in the next county by now anyway and it all just felt disrespectful.  So I stayed behind and followed her down the descent onto a long flat stretch with a strong cross wind.  There, we shared the work for about fifteen minutes.  I cut the wind for a Grand Tour legend and vice versa.  It is and will forever be one of my favourite ever cycling moments. 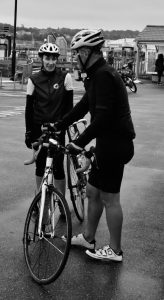 End of day one – thanks for sharing

She’s hoping to join us for about two weeks in Scotland.  I hope it works out.  I’m curious to know more about her story but I already have respect for her individuality and determination.  Kind of obvious – but worth saying – there’s no-one like her.

Footnote:  I got cramp on the ferry back to Soton.  A sure sign that the universe was cross with me for event thinking about taking the KoM points. 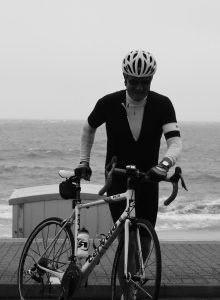