What have I done?

I said on the home page that I can be impulsive.

I had a call from an old golfing buddy on May 2nd.  He asked me if I wanted to ride 6,700km around the entire coastline of England, Scotland and Wales.  The ride would leave on July 4th and arrive back at the start on September 5th.

I discussed it with the girls.  They said, “you’re out of shape – you need more exercise, say yes”.  So I did.

Then I did some maths

It’s also twice as long as the Tour de France.

Given the speed I’ll be riding – slow – it will also be more than four times as much chamois time as a TdF rider would have.  Plus:  they have two rest days in three weeks.  I’ll have none in over nine weeks

The amount of climbing is equivalent to 8.5 Everests. Call it an Everest a week.

And I’ve worked out that it’s going to be about 1.5 million pedal strokes.

I say again – what have I done? 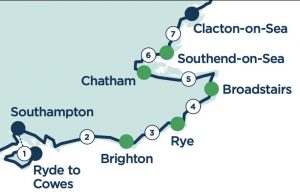 Answer:  committed to a once-in-a-lifetime chance to do something extraordinary.

This is the start of what we will turn into the charity heart of Britain’s cycling year.

My resting heart rate is 25% lower.

My diabetes (Type 1) is better controlled than it has ever been.

I’ve been out riding in some startlingly beautiful places on some gorgeous mornings.

I can get into my slim fit wardrobe again.

And Jane says she really fancies me again.

Maybe this could be good?